NodeBox 2 (2008) started the conversion from code to a node-based UI. Experience through workshops and user feedback led to a new approach and NodeBox 3. No active development.

NodeBox 1 (2004, the “classic”) is a free software application for Mac OS X that generates 2D graphics (static, animated or interactive) using Python programming code. It was originally based on DrawBot, and has since become a serious playground for research in design automation and AI, with many libraries. NodeBox 1 is in “maintenace mode”: we only release new versions to fix critical issues. free Read more »

NOGL (2011) is a free, cross-platform, hardware-accelerated library for creating 2D animations using Python programming code. It is based on Pyglet and uses the NodeBox 1 API, minus the graphical user interface. It was initiated as part of a computer game project (City in a bottle). free cross-platform GPU Read more »

In 2003 we created NodeBox (now cited as “NodeBox 1” or the “classic” version) to overcome limitations in existing computer graphics software. We didn’t just want to apply pre-build effects, we wanted to create our own. We wanted to connect the visual output to different input channels, such as databases, corpora and information from the WWW. This is possible in a programming language (Python), where plug-in libraries can be freely combined. This work was inspired by Processing and DrawBot.

However, not everyone is a programmer. Since NodeBox 1, different spin-off versions are in development. NodeBox 3 focuses on a flexible GUI instead of Python code. NOGL focuses on performance. The idea is to converge on one version: one that is free, cross-platform, with a node-based GUI, hardware accelerated, parallel, working on mobile devices, with both scientific and artistic functionality for robust data visualization.

All versions of NodeBox are free software and source code is available on GitHub. 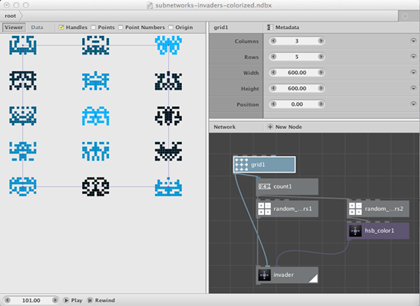 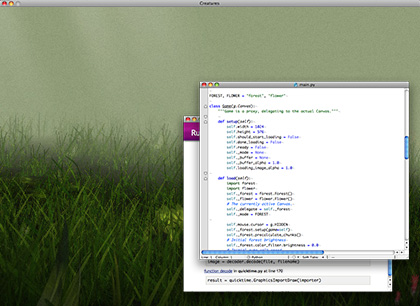 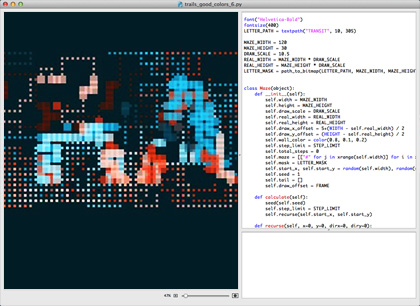